High Sunn (Justin Cheromiah) was a one man band from the Bay Area (California). Since his teens he has been writing, releasing, and performing guitar-focused indie-pop with catchy hooks and lofi vocals. Out of his very large discography, Crafted Sounds worked with him on a limited run of tapes for his 2016 release Flower Funeral. High Sunn would go on to put out many other records after this release. His catalog is just full of beautifully simple devotional rock tunes. 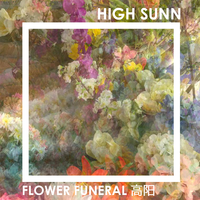