The Lopez are a DIY-driven, fuzzy power pop duo out of Pittsburgh, PA that performed and organized community events across the city for over 8 years. In November 2016, they started putting together a record which would become Heart Punch. This record explores their infectious synth rock craft to the fullest. Their music is best described by Jesse in an interview from 2017: “We hate the pop system, or whatever you want to call it, but we love making poppy melodic music. We just try to throw some dirt on it.” The “dirt” they make is refreshing and relatively original to what we is circulating in indie rock today.

Leading up to the completion of Heart Punch, guitarist Jesse Flati abruptly passed in Fall 2018. At that time, the record was almost complete, and it needed some final touches before being handed off for pressing. The Pittsburgh community jumped in without hesitation to help to make sure the record was done right by contributing to the vinyl production of Heart Punch.

Steph Wolf put together the most immaculate vinyl release in his honor. The final product was pressed on metallic gold vinyl, and came with a gold embossed cover, lyric insert, a fold-out high gloss poster, 11 polaroid photos, a kitty sicker, and a download code. Crafted Sounds contributed to the release with a small batch of tapes. 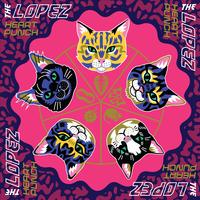